Most people can say they’ve taken a cooking class once or twice in their life. Not many people can say they took a cooking class in Italy making the dish in the region where it originated. I recently had the amazing opportunity to cook pesto gnocchi in the Ligurian region of Italy where pesto was first created. My friend and I were picked up in the small village of Monterosso and driven up the winding roads of Cinque Terre, where a quaint hotel and restaurant were nestled in between the trees. Waiting for us on the terrace was a table set up with all of the ingredients and utensils needed for the evening. After letting us settle in with a glass of Prosecco, we were then put straight to work.

The Italian word, pestare, means to pound or to crush. So, in the traditional Italian fashion, we pounded our pesto with a marble mortar and wooden pestle. We began by crushing the garlic and pine nuts, moving the pestle in a downward circular motion. We slowly added the basil leaves, adding oil once the leaves had become paste like and sticky. The last step was to add olive oil, of course, a dash of salt, and parmesan cheese. We had already enjoyed many pesto dishes over our study abroad in Italy, but the best thing about this pesto was we were able to make it to our liking, tasting it and adding a dash of salt or cheese until it was perfect.

Once the pesto was complete, we set it aside and began to make the gnocchi (my all time favorite Italian pasta dish). I’ve always wanted to make gnocchi from scratch, but was always intimidated by the process. However, I was surprised by how simple and easy it was! After slicing, boiling, and mashing the potatoes, we mixed in the flour and egg and kneaded the dough on the floured wooden table into long snakes. We cut the dough into tiny squares, boiled them for 4 minutes, and voila! (or basta! as the Italians would say), the gnocchi was ready. We mixed the warm bites of gnocchi with the pesto and carefully plated it for a beautiful presentation.

We carried our steaming plates of gnocchi to the table already set for us waiting with glasses of white wine. I know you’re not supposed to toot your own horn when it comes to describing your own cooking, but honestly it was one of the best meals we ate in our 5 weeks of Italian living. We were so impressed with ourselves. When you’re using such fresh ingredients, taking your time, and being guided by an Italian chef, it is hard to go wrong. We savored every bite, sipping our wine, gazing over the Italian mountainside, knowing this meal was a memory in the making.

Picking the basil to crush. 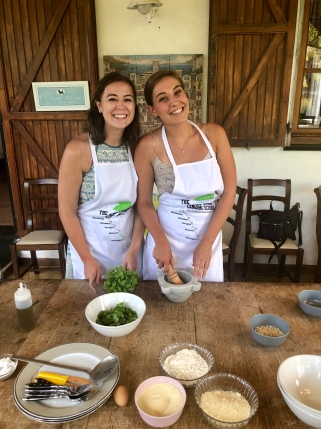 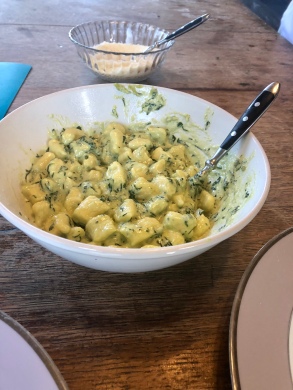 Freshly mixed in with the pesto.

Almost too beautiful to eat.